Home » About ESS » Structure and Governance 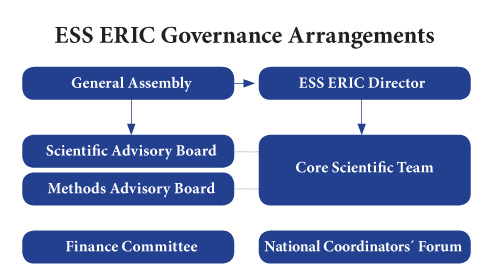 The ESS ERIC is governed by a General Assembly which appoints the Director. The governance arrangements are detailed in the ESS ERIC Statutes and are elaborated as required in the Standing Orders.

The Commission Implementing Decision setting up the ESS as an ERIC was published on 30 November 2013.

The activities of the ESS ERIC are detailed in its annual activity reports. Read the latest report: Annual Activity Report 2021-2022.

The General Assembly has three standing committees: a Scientific Advisory Board, a Methods Advisory Board and a Finance Committee. More information on their activity and membership can be found below.

Switzerland is an Observer and is represented by Professor Georg Lutz, FORS (Swiss Foundation for Research in Social Sciences).

The Scientific Advisory Board (SAB) comprises eight members, appointed by the General Assembly following nominations from its Members.

The Methods Advisory Board (MAB) advises the General Assembly, the Director and the Core Scientific Team on technical and methodological aspects of the survey. It comprises six members, appointed by the General Assembly following nominations from its Members.

Director and Committees of the Director

The ESS ERIC Headquarters are hosted by City, University of London (UK). The Centre was established in 2003 by its Founding Director Roger Jowell, who led it until his death in December 2011.

Prior to October 2003, the ESS was hosted by the National Centre for Social Research, whose generous support and development made the project possible.

The current complement of staff at ESS ERIC HQ is:

The Director, Professor Rory Fitzgerald, is supported in the design and implementation of the ESS ERIC Work Programme by the Core Scientific Team (CST), comprising seven institutions. These are:

More information on the membership of the CST can be found below.