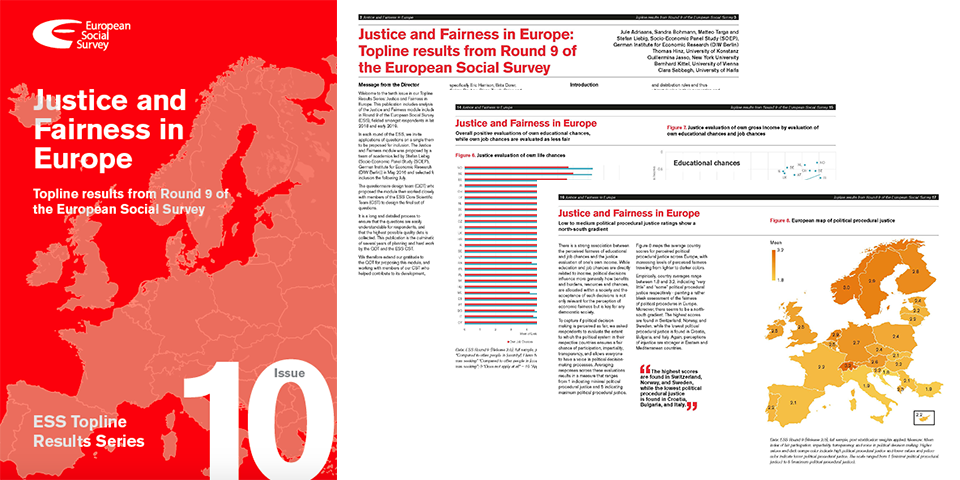 The European Social Survey (ESS) has published a new Topline Results series report on Justice and Fairness in society, based on analysis of the most recently available dataset.

ESS Topline Results Series Issue 10: Justice and Fairness in Europe was formally launched by three of the report’s authors at an online seminar held on Friday (2 October).

This new report was written by the team of external academics who proposed and helped design the Justice and Fairness module, fielded in Round 9 (2018/19) of our survey.

The authors analysed data collected in 27 countries to examine public attitudes towards distributive principles, the fairness of incomes, life chances and political procedures.

They discovered a wide variation between countries when it came to agreement that a society is fair when income and wealth are distributed equally - from 23% in Norway to 78% in Portugal.

On the equity principle, there is a general consensus that that the more an individual contributes to society, the more that they should receive.

In 23 out of 27 countries a majority of respondents disagreed with the entitlement principle - that a society is fair when people from families with high social status enjoy privileges in their lives.

When it came to attitudes towards those receiving the lowest 10% of incomes in each country, a majority of respondents across Europe found these to be ‘unfairly low’.

The authors found a strong negative relationship between the actual level of inequality in a country (measured by the 90/10 income inequality ratio) and attitudes towards the lowest incomes.

The justice and fairness module included a question on whether respondents felt their own gross income was fair, with up to 80% of Hungarians thinking they are underpaid.

Justice and Fairness in Europe assessed feelings of life chances: whether people think that their society gives them a fair chance of achieving the desired level of education and employment opportunities compared to other people.

The report states: “In countries where own educational and job chances are evaluated more positively, respondents’ own gross incomes are evaluated as fairer on average.”

An assessment was also made as to whether respondents feel that their political ensures a fair chance of participation, impartiality, transparency, and allows everyone to have a voice.

This report was created as part of the collaborative research project - Perceptions of Inequalities and Justice in Europe - located at the German Institute for Economic Research (DIW Berlin) and funded by the Leibniz Association.

Data collected in Round 9 (2018/19) is available to download for use in statistical software programmes or to analyse using our Online Analysis Tool.

Watch a recording of the online launch event