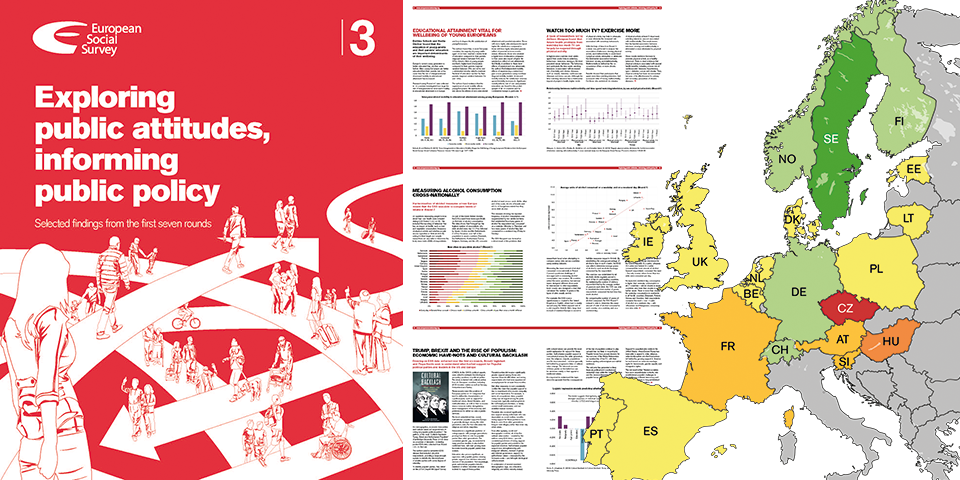 A publication that showcases a wide range of articles based on European Social Survey (ESS) data collected over the first seven rounds is now available online.

The brochure includes an exclusive article, based on data analysis by Pippa Norris and Ronald Inglehart that was published in Cultural Backlash: Trump, Brexit, and Authoritarian Populism earlier this year.

The authors analysed data collected from 2002-13 in an attempt to understand what fuels support for populist political parties amongst European respondents.

Another paper to feature found that the education levels of young adults - and, indeed, of their parents - are strong indicators of respondents’ wellbeing.

A team of researchers led by Adilson Marques discovered that future health problems associated with watching too much television can be mitigated by undertaking physical activity.

The publication offers an insight into how we harmonised alcohol intake in Round 7 (2014/15), by collecting information on the number of units of alcohol in drinks familiar to respondents in each country.

We also combined three separate survey items measuring attitudes towards immigration to find a mean score for each country, in each round of our survey.

Research using our data - collected every two years from Round 1 (2002/03) to Round 7 (2014/15) - investigated the differences in attitudes towards homosexuality between younger and older respondents.

It revealed that respondents aged over 75 were around 20 percentage points less accepting of gay and lesbian people than those aged 15-24.

We also considered whether our data had somewhat predicted the UK public’s decision to vote to leave the European Union in the June 2016 referendum.

Data collected ahead of the referendum found that UK respondents thought European unification had already gone too far, and displayed significantly lower levels of trust in the European Parliament than almost all other participating countries.

This is the third publication in the series, with previous issues considering research using our data from the first three rounds (2002-07) and the first five rounds (2002-11).