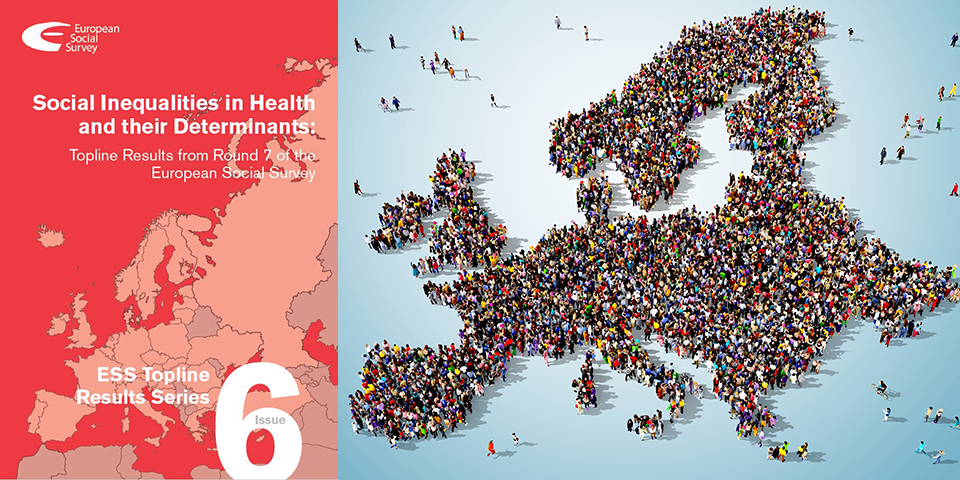 A new European Social Survey (ESS) report analyses European attitudes towards physical and mental health from the most recent survey.

The report concludes that a substantial number of Europeans suffer from a wide range of physical and mental health conditions, in part due to their economic and social conditions.

The authors also found that promoting healthy lifestyles alone does not seem to be a sufficient strategy for reducing health problems, and should be supported by income redistribution policies and improving physical working conditions.

ESS Topline Results Series issue 6: Social Inequalities in Health and their Determinants is based on over 40,000 survey responses gathered across 21 European countries during 2014/15.

Among the clearest findings is that, across Europe, women are much more likely than men to report depressive symptoms and severe headaches.

In all 21 European countries, women reported more signs of depression than their male compatriots, with some countries showing huge discrepancies.

Over a quarter of women said they experienced depressive symptoms in four countries: Portugal, Czech Republic, Hungary and Poland. Only in Hungary did more than 20% of men say they suffer in this way.

Women are also much more likely to report suffering from severe headaches across Europe - split between genders, the 12 countries with the highest rates are composed of the female population.

Those who suffer from severe headaches range from a high of 30.2% amongst French women to a low of 3.8% amongst Irish men.

There is a significant gender gap when looking at current smoking rates: the 13 highest rates of smokers are male, with men in Lithuania (48.8%) and Hungary (41.3%) the most likely to smoke.

The report finds that self-reported smoking rates are much lower in northern Europe, the UK and Ireland and considerably higher among men in central and eastern Europe.

In combining male and female smoking rates, Sweden has the least number of smokers, with under 15%. This statistic is made even more striking when looking at the number of Swedes who previously smoked - 77.8% of men and 76.2% of women (the two highest rates in Europe).

High percentages of former smokers and low rates of current smokers are prevalent throughout the Nordic region, particularly in Sweden and Norway but also in Denmark and Finland.

Among current smokers, the percentage smoking more than 20 cigarettes on a typical day is particularly high in Austria, Poland and Israel.

Men are also far more likely than women to be overweight in all 21 countries across Europe: the highest levels are 67.4% in the Czech Republic, 63.8% in Hungary and 61.2% in Slovenia.

The lowest rates of people who think of themselves as overweight or obese can be found amongst women in Switzerland (29.9%), Denmark and Austria (both 38.9%).

Binge drinking rates are particularly high in the UK and Portugal - frequent binge drinking is rare amongst the Nordic countries, and amongst women in central and eastern Europe.

The number of units of alcohol consumed is particularly high in Ireland whilst low rates of frequent alcohol consumption are reported in Israel and central and eastern Europe (especially amongst women).

Prof. Terje A. Eikemo, an author of the report, said: “Although these first results have provided new evidence on the linkages between health and their determinants in European welfare states, we have only scratched the surface of all the opportunities that lie within this new module. I hope these new opportunities will give spark to more collaborative work between the social and medical sciences.”

Dr. Rory Fitzgerald, Director of ESS, added: “These Topline results from the ESS health inequalities module show the stark differences in health within and between countries. The results provide academics and policy makers with rich data, illuminating differences and suggesting possible reasons for them.”

A copy of the report is available in French